Although I am a 460 and FE afficiano, there's a new big block out that has not yet attracted much attention, and it can make BIG power. I know that this is a 429-460 site, but this is one way to get the message out:

The new Ford 6.2L PV8 engine shares common components, can be punched out for more cubes, has a wonderful cylinder head, and has nostalgic ties to the old 427 SOHC. Ford has not marketed it this way in the aftermarket as it doesn't come in a Mustang, but maybe some of us can make that change:

As opposed to the Coyote, the 6.2L's block is cast iron, complete with cross bolted 4-bolt mains, and priority oiling. The lower half of the cylinders are siamesed, creating an entirely solid bulkhead. The bore spacing is nearly the same as the FE's, and the cylinders can be punched out 3mm (0.120") or iin some cases a little more. Thrust sides of the bores are really heavy to keep a piston ring package together. Head studs run right down to the bulkhead so that the deck is undistorted by torquing.

Now for the fun stuff: The 6.2L's rods bearings are identical to the LS1 large bearing SBC, and the rods are the same length as an aftermarket 6.200" LS1!! The width is slightly wider on the rod bearing end, but the extra side clearance will not affect things. The factory crank is nodular iron, but Livernois or any of the crank manufacturers can supply a billet for a stroker. A 5mm stroker can be housed with a 6.100 rod and still use all commercially available components.

The engine is a 2-valve overhead cam arrangement, very similar to the 427 SOHC except that the cams have independent timing chains - one of the weaknesses of the cammer. Ports are straight shot and large, valves are big, with small 5/16 stems for high flow. Combustion chambers look a lot like a 351C, but they have dual plugs. Use one or both with an MSD crank trigger.

Manley now makes high (11.5:1) and low (9.5:1) compression pistons with SBC wrist pins so the Chevy rod can be used. These will work with a stroker or standard crank. Manley also makes oversized valves.

The only thing that's not out yet are some really hot cams. These will have to be custom for now, but I'm sure that they are on their way.

So how about some examples and dyno sheets?

Put some pictures up.

How big can you make them? How much can the heads support?

Don't believe there are many of thse engine out there yet beings just starting production in 2010. I'd say it will be a few years before they are available for cheap in junkyards and then it lacks cubic inches at 379ci. Yes you can bore it and stroke it and Roush did a 7.0l that made 700 hp... so it has potential for being a truck engine

I'd also be willing to bet you'll be dealing with ford revisions and changes by the month of production......

Welcome to the site Mike.

Sorry for the lack of detail. The 6.2L (379ci stock) can be pushed out easily to 430 ci. Power numbers naturally aspirated of over 800hp have already been achieved. It's true that there are not a ton of these motors out there, but I saw one at Columbus for sale new in factory trim for $3700, pretty cheap when you consider what you can spend on an FE.

While it is not a bolt-together engine like the pushrod motors yet, if you are creative, it's not too hard. The intake port flange lays horizontal. Think about that - perfect for a blower or hilborn injectors. That's how I plan to put mine together. The other thing that I didn't mention is the oil pump. The 6.2L has a crank driven oil pump. To upgrade it, the easiest thing to do is to put a dry sump on.

In addition to the cylinders, I've sonic'd the decks and they are around 0.500" thick. In my opinion, and another friend that ran name nitro cars for several years who has viewed it, the motor will handle nitro no problem unblown. That's the route I'd like to eventually take with one. Blown with nitro, the concern is the aluminum heads and heat as he said that the cammer heads used to melt the ports out. He's working on a recreation of the first blown nitro funny car to ever hit the strip that he was the head mechanic on. I'd love to see one in there as finished they look a lot like a cammer - you never know. I'll see if I can get a few pics up if I get a chance.

it's a shame it doesn't have 4 valve heads

Is this the engine that Ford has labelled as the Boss is back? Was that a 6.2 on the cart at Bowle's shop for the Winter Tech Seminar? It was long and had BOSS in the lifter valley. I think it had recently came out of his yellow Mustang.

I seem to remember Bowles telling me something about Ford wanting to do a crate version of it to the tune of 7 liters, 700 HP...

Didn't Bowles have a worked over 6.2 in his Raptor that had been rubbed on by the Rousch shop?

Does this engine use roller finger followers?

Dam those guy get all the toy's

Dam those guy get all the toy's

Give it 20 years and we all will be on the 379 forum building 6.2L engines. Maybe by them Ford will have made a 7.0L version for us. I will say it is a modern day Cammer, although the valve angles and chamber not exactly a typical Hemi.

This site has some picture of the heads and block.

No, unlike the modular engines, the 6.2L uses roller rockerarms that act directly on the camshafts so there's not that complexity. The rockers have hydraulic lash adjusters. The rockers are mounted on shafts which bolt down. It's the same concept as the old 427 SOHC.

The real fathers of this engine are Kevin Tallio (heads, top end), and Jaggadesh Sorab (bottom end) - both great guys. Although there may be a few concepts of this engine that may have carried over from Modular engines (crank driven oil pump, which is has its drawbacks for HP), nothing is common like the Coyote, which is really just a modular motor.

Those of you that attended the winter tech siminiar at Mr. Bowles shop saw his 427......it was the engine sitting on the floor with the big blue valve covers.

IF the bore spacing is the same, how close is it to put these heads on an FE...?

rmcomprandy wrote:IF the bore spacing is the same, how close is it to put these heads on an FE...?

Guess could take a head gasket and lay it on an FE block see how things line up.

rmcomprandy wrote:IF the bore spacing is the same, how close is it to put these heads on an FE...?

Guess could take a head gasket and lay it on an FE block see how things line up.

That's over a hundred thou per bore so, never mind. They might fit on an AMC block... LOL.

Lem Evans wrote:Those of you that attended the winter tech siminiar at Mr. Bowles shop saw his 427......it was the engine sitting on the floor with the big blue valve covers. 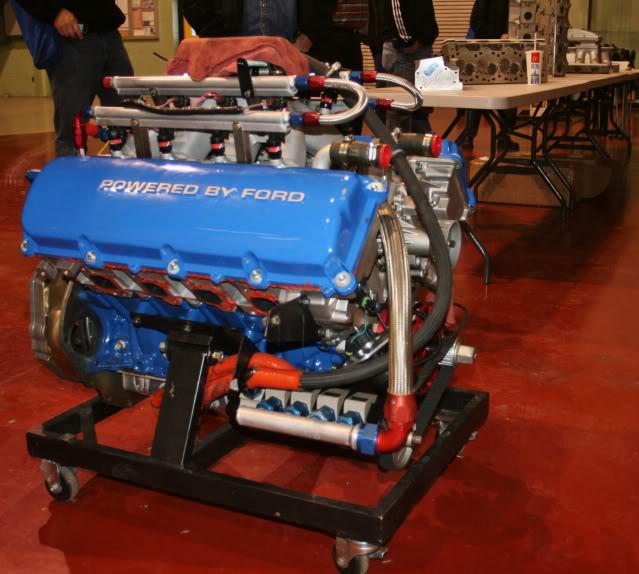 That's the engine I was talking about. That thing was sweet!