Wondering if any of those on the board have had a look at the new wedge cylinder heads from Ford Racing. I realize they are for the pro stock block, but wondering if an un-machined Eliminator block could be adapted to use the new heads. I know the lifter position on the pro stock blocks are moved and the camshaft is moved way up. Realizing it's a different animal has anyone had a look to see how far from the previous motorsports block it is? Thanks!

When Darin Morgan had just finished working on it, he showed the plastic model to me. As I held it and was admiring it, I noticed that the valve layout was still the same and I sorta' jumped his case about it asking "Darin, why didn't you reverse the valves?" He said; "I did Charlie, we changed the bank offset in the block. The left bank is forward now."

So what that means is that if you put it (the Pro Stock head) on a traditional FRPP or Eliminator block, the number 1 cylinder will still have the intake valve furtherest forward. Therefore the intake / exhaust valve layout, relative to the cam lobes will still be a conventional pattern.

As to the head bolt locations, I have no idea as to how far off they are. Buy one and find out for all of us if you will please.

Thanks Charlie - Not sure how much was changed after the Darin Morgan designed head. But from what I understand this head is not the one Darin designed. From what was told it was re-done. I'm fortunate that I don't have to buy it to look at it! I'll try and go get a look and some photos next week. A good friend in Newark Ohio told me to come look at it and the block. He has several that he isn't using, I'll get some photos of the Mirror Head and block as well. It sure seems like Ford should have made a tall deck version of the new block so you could build some inches. Larry thinks he could get enough stroke in it to still make 550-560 inches. ( in part because the camshaft is moved so far up in the block.) BTW have you heard anything about a new Edelbrock Victor 3 head for a 460? Thank you for sharing in your knowledge.

Larry was kind enough to send a Pro Stock block and a Pro Stock wedge head down to our Ford Winter Tech Seminar last year which was held at Donald Bowles's shop in Madisonville, KY. Tell him thanks again for sending those parts down.

So you are in good shape if you can go over to Larry's and mock up on a conventional block. If the head bolt holes have not been machined in an Eliminator block, I don't foresee a big problem. Something that you need to know is, that on a conventional 429-460 Ford block, the centerline of the bore is .030" closer to the bottom row of head bolts,,,,than the mid-point distance between the top row and the bottom row. Many people assume or "think" the the bore X axis is the same as the mid-point distance between the top and bottom rows of headbolts. It's not.

I do think you will wind up wanting to spread the lifter bores, as always the straighter you can get the pushrods the better. Again with special blocks that have not had the lifter bores machined, such as the C&C Motorsports alum. block or the Eliminator block, you have some leeway to move things around. Of course we'd be talking a dedicated camshaft and .937" keyway lifters when doing the above.

I'm not sure about the part number. I've read elsewhere that these heads are "not approved" as of yet. Although I'm not sure what that means. I know the NHRA listed the JC51 heads approved for PS last year but haven't looked to see if it's been removed. Plus if these are the second generation wedge perhaps they have a different number. And I wouldn't rule out they don't have an official Ford part number yet? Lord only knows, but I'll report what I find out.

I did get a chance to take a look at the heads this week when visiting with Larry. They do have the JC51 part number on them. I'm going back down this week if time allows and take a better look at them and one of the blocks. Of course with Larry's schedule I'm just trying to stay out of the road as they are busy getting things ready for more testing and then the Gators. He was hard at it, and I'm sure he'll have something for the competition soon. Sounded like Pomona gave him some headaches with the new ignition system not doing what they thought it would and hurt some parts. I'll tell you one thing those new blocks are impressive! The cam bore is a monster! I think it's 70mm IIRC and the lifters are massive! 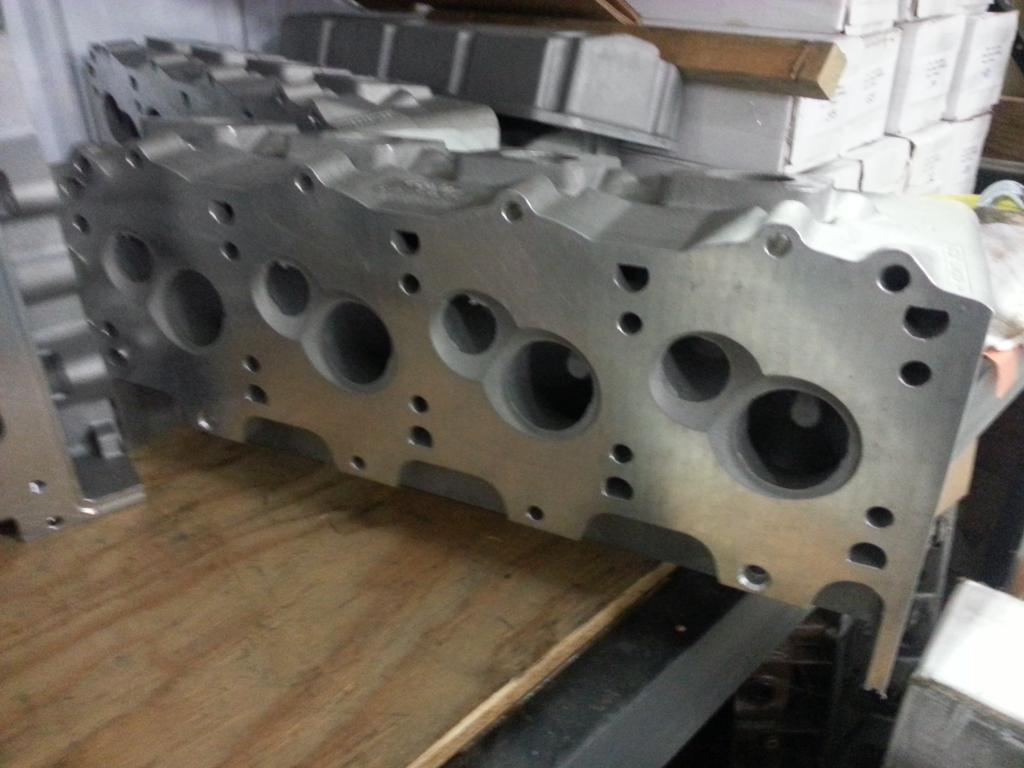 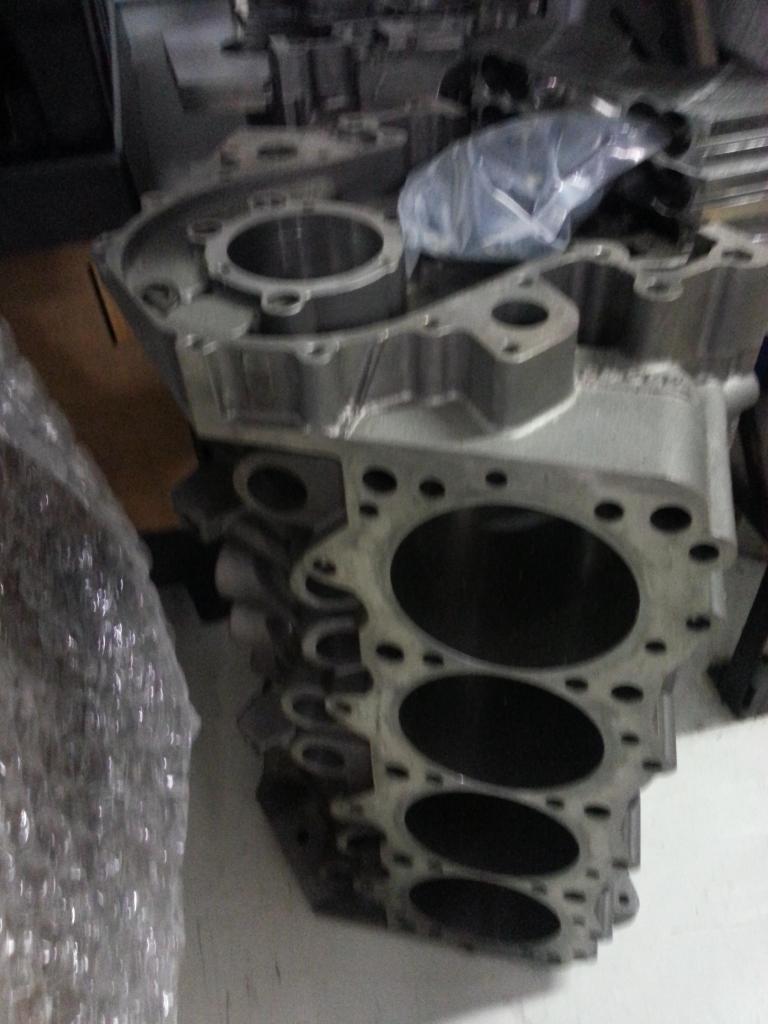 Wondering if anyone has even worked with those heads? I don't remember seeing any of the big name racing porters mentioning them at the PRI show. I suspect the wedge deal has more stories of politics and craziness than a Washington Post editorial!

Sharxsdesign,I don't mean to jack your thread,but do you race a Falcon wagon? If so I talked w/you a few years back at Night under fire in Norwalk.

I would like to know if any other heads fit onto THAT block.

Yea that ole wagon is my bucket of bolts. With Larry's help hopefully we will find out what can work with what. Larry has been a great friend for years, and I'm just thrilled he's intrigued enough with my project that he wants to help. I don't think Ford Racing is aware of how much racers like Larry motivate and help us weekend warriors.

Seeing your car that weekend is one of the reasons that I now own a Falcon.

I'm humbled that it was one of your motivators, it's a fun car that I've had since high school. Now my seventeen year old daughter is chomping at the reigns to drive. With any luck she will hand it off to her kids someday (many years from now!.)

I swear I could put my leg in that cam bore, so that wouldn't surprise me!

sharxdesign wrote:I swear I could put my leg in that cam bore, so that wouldn't surprise me!

X2 I was shocked to see the mains are as big as the cam journals !

Thought i would add a little info to this.

Ive been running this head since 2011 on my comp eliminator 4 cyl. Have no info on how it works on a V8 but over the E460 head it was an easy 10-15 faster. If anyone would like anymore info message me your email or phone number.

How about some engine pics?

590 KA wrote:Thought i would add a little info to this.

Ive been running this head since 2011 on my comp eliminator 4 cyl. Have no info on how it works on a V8 but over the E460 head it was an easy 10-15 faster. If anyone would like anymore info message me your email or phone number.

Hey Clint welcome to the forum. Guys I have know of Clint and his famous dad for years being Chevy comp guys. But over the last few years Clint is running this bad ass 4 cylinder comp altered with a Ford motor and it so cool. I'm sur when could share some info in these heads as he has a few of them.